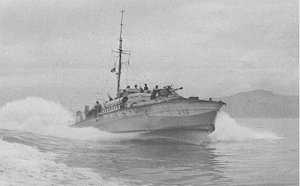 Flotilla formed. Most of its officers and men had a long and lively experience with British (R.N.) coastal forces in the English Channel, the North Sea, or the Mediterranean.

Operational from H.M.S. Fervent, Coastal Forces Base off Dover at Ramsgate.

First mission assigned to boats 460,462,464 and 465; escort of a hazardous mine gathering expedition to the coast of France. They were to proceed to the D-Day beaches with two British M.T.B.’s, and protect them while volunteers were landed by outboards to lift sample mines from beach defence.

They managed to complete their mission undetected, and returned with the German mines. What was learned from the dismantling of these mines enabled our troops to avoid considerable casualties when D-Day finally came.

Badly shot up an enemy convoy. The tiny, fast M.T.B.’s joined forces with the Tribals (including the Canadian 65th M.T.B. Flotilla) to put many enemy warships out of action before the Channel became clogged with tempting targets on June 6. They fought all up and down the Channel, intercepting enemy coastal convoys, dueling with German E-boats, luring German destroyers within the gun range of heavier warships, shooting up escort ships, and torpedoing merchant vessels.

Boats 459,464,465, and 466 twenty four miles off Boulogne. ‘Starshell’ and high explosive bursts ahead of them indicated that British M.T.B.’s were already in action with a convoy moving between Dieppe and Boulogne. Then gun flashes lifted from the dark shore, and a few seconds later ‘starshell’ burst above the Canadians. They had been detected; shore batteries had them in range. The German force, now thoroughly aroused and vigilant, appeared to consist of four shallow craft, plus heavily armed flak ships with accompanying E-boats. As the Canadian M.T.B.’s ran in toward the convoy, the Germans swung their guns, and turned their full fire power on the Canadians. A dazzling glare of starshell blazed in the eyes of the Canadians. Through, it the red, green, and yellow streams of tracer fire came arching down. Replying with ‘starshell’ of their own, which must have proven equally discon- certing to the enemy, the Canadians bore in, and ran alongside the convoy for five minutes with all guns firing. At the end of the line of German ships, they swung out to sea, laying a smoke screen behind them. They had suffered no casualties, and yet could report no definite losses on the part of the enemy. They had certainly scored may hits; but the brief, slashing action fought under a blaze of ‘starshell’ gave no opportunity for an assessment of damages.

These nightly patrols, and this swift, fierce, incisive action, were to form the pattern of the work of the M.T.B.’s right up to D-Day, and for several months afterwards.

Moved to Portsmouth – based H.M.S. Hornet. 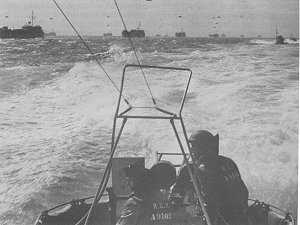 Operation Neptune. For the 29th Flotilla, the primary duty from the afternoon of D-Day onward was the close-in protection of the eastern side of the assault lines and anchorages. D-Day, off Point Barfleur, at the western tip of Baie De La Seine, the M.T.B.’s of the 29th Canadian Flotilla were a part of the inmost patrol. They were ordered to take up patrol in the Tunny South area, about 13 miles south-west of Le Havre. There were two troublesome Eblings based on Le Havre, and the city’s harbour was also an important base for E-boats and R-boats.

It was a bad night for coastal craft, with a rough sea and a clear sky which provided too much visibility.
At a few minutes after four in the morning, signs of battle appeared to the northward. Running in toward what appeared to be a gun action between British M.T.B.’s and German craft, the boats of the 29th fired starshell over the scene at a range of three thousand yards. The bursts revealed a line of six R-boats moving in the direction of the anchorages. The Canadians opened fire at a range of about seven hundred yards, closed to a range of a hundred and fifty yards in the face of heavy return fire, and saw one of the German craft blow up. The other German boats turned away and ran for Le Havre, making smoke. All of them had been hit, some of them repeatedly; and they had set off on a route which would take them across the British minefield laid in from off Le Havre. The action had already worked in very close to the fringes of the field, and the boats of the 29th had observed two or three surface mines bobbing about them. They therefore turned away, leaving the retreating enemy to pick their way into Le Havre with what luck he could.

Four men had been wounded in the action. On return to the anchorage in the morning the first task of the 29th. was to find one among the hundreds of crowded ships which could take the casualties on board. 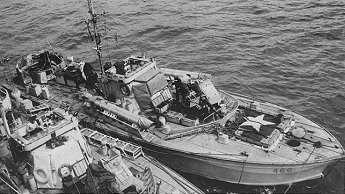 The 29th saw the/two Elbings from Le Havre nosing their way into the anchorage. The M.T.B.’s, hopelessly outgunned and without torpedoes, had no means of attack. All they could do as to let themselves be detected and lead the Elbings away from the assault area on a chase-which ended some two miles off Le Havre. Although denied any choice of offensive action, they had at least diverted an attack; and in the morning their disappointment was tempered by personal congratulations from Sir Philip Vian, Naval Commander of the Eastern Task Force.

FOOTNOTE
For a short time torpedoes were removed from the MTB’S, in favour of small depth charges to cope with the 2-men manned human torpedoes, or Walter “W” boats, based at Le Havre.

Boats 459,460,465 and 466 returned to Portsmouth for a night’s rest.
The others – 461, 462 462, 463 and 464 – were on patrol in the central part of Tunney South, and had chased some E-boats which outran them to the west. Coming back onto station at a little after two a.m., they stopped engines and began a ‘listening watch’ by hydrophone. They had been ‘silent and stopped’ in the dark for a little less than half an hour when, once again, the two Elbings loomed suddenly in front of them, not five hundred yards off. Having other preoccupations the German destroyers had not sighted the M.T.B.’s; they were apparently just getting into position to bombard the assault anchorage. Fired a minute or so later, their first ‘starshells’, passed above their heads of the Canadians to burst over the line of ships before the beaches. The M.T.B.’s started their engines slowly, and cautiously hoping to remain unobserved. They were scarcely under way, however, when the German ships turned on them, and opened with rapid and accurate salvoes that kept them dodging through a smoke screen for ten minutes. Boat 464, stationed astern and making smoke for the others, took the brunt of the action. One of its men was killed and another seriously injured; but once again, a projected attack on the ships at anchor had been broken up.

M.T.B. 459 picked up Vice-Admiral P. Nelles from a British transport to take him over to H.M.C.S. Algonquin for a fast trip to Portsmouth. Leading Seaman J. Borthwick had the honour of piping Adm. Nelles aboard M.T.B.459.

(Jim Borthwick’s Comment: I made an awful job of piping. Adm. Nelles approached me later, saying “It’s a far better job you are doing here, than worrying about entertaining an Admiral”.)

Boats 461,463 and 464 were in position to fire torpedoes at the two Elbing destroyers when they were ordered to retire. British destroyers had appeared on the scene; their salvoes went arching over the withdrawing M.T.B.’s, and the Elbings fled with smoke rising from their afterparts.

The Friends of the Naval Museum

The Friends of the Naval Museum are dedicated to preserving naval heritage in Manitoba, and in turn promote the history of Canada's Navy.

There are two ways you may contact the Naval Museum of Manitoba.